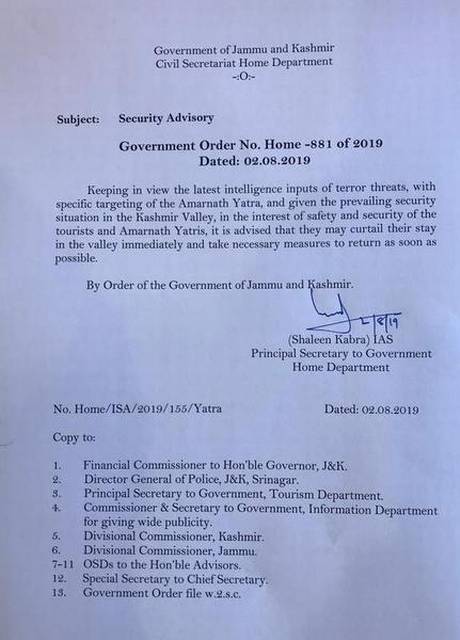 The Jammu and Kashmir government on Friday asked Amarnath Yatris and tourists to immediately make necessary arrangements to cut short their stay in the Valley and return as soon as possible in the wake of intelligence inputs of “specific terror threats” to the pilgrimage.

The Principal Secretary (Home) issued a security advisory, saying pilgrims and tourists “may curtail their stay” and “return as soon as possible.”

“Keeping in view the latest intelligence inputs of terror threats, with specific targeting of the Amarnath Yatra, and given the prevailing security situation in the Kashmir Valley, in the interest of safety and security of the tourists and Amarnath Yatris, it is advised that they may curtail their stay in the Valley immediately and take necessary measures to return as soon as possible,” it said.

The Army has claimed that terrorists and Pakistan Army desperate to disrupt peace in Jammu and Kashmir and attempting to attack the Amarnath Yatra.

A landmine with marks of a Pakistan ordinance factory and a U.S.-made rifle were among the cache of arm were seized in one of the Amarnath Yatra routes. An additional 25,000 security personnel were ordered to be moved to Jammu and Kashmir on Thursday.