Senior Superintendent of Police Shailendra Mishra, who is seen among the most competent officers to have successfully manned militancy-infested Shopian district in the past around a decade, is now breaking the internet for his emotional tribute to his slain Personal Security Officer, Javed Ahmed Dar aka JD who was killed by militants on the day Misra left the restive district last year.

Mishra is seen so successful in manning Shopian that during his tenure as SSP of the district militants never dared to kill a policeman. But as the fate had it on the day he was transferred out of the district, his own PSO was the first victim. JD was abducted and then killed in July 2018

Year on, Mishra remembers JD in an emotional tribute.

“ Sir, iske ghar mein problem hai, isko please chutti chodhna hai “ and I’d promptly say YES. This was JD, our favourite in the team. He was loved by all in the close protection team that kept me out of harms way while at work, while at home or while just playing a game of cricket with the local Kashmiri teams in the restive districts of the valley. Everyone in the team knew how to get their work done subtly, to get leaves sanctioned, punishments reduced, pardons achieved and just an EIDI on each Eid, out of their boss. The way was, via JD. 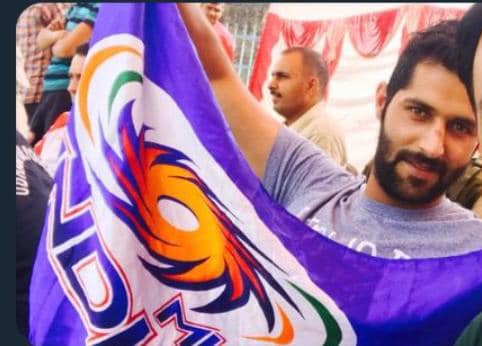 I didn’t know why I liked him so much. Born in the troubled village of vehil in shopian district of south Kashmir, Javed Ahmed Dar, lovingly called JD was one of five siblings, with a brother and three sisters. He first worked with me during the Kashmir floods of 2014 as a new recruit and since then remained my shadow till his last breath. Lanky, tall, handsome enough to give any modelling star a run for his money, could grow a beard that youngsters today would kill to have. He was never very communicative. Yet he had his ways of winning hearts. He’d have this big sheepish grin that could have let him get away with murder, but he settled for stealing hearts.

Every time we sat in our armoured vehicles, he was the one to keep a sharp eye on the pathway, on the others in the party and of course on the civilians who he held on to very humanely even in dire situations. During the 2016 law and order situation , JD carried an injured civilian from a law and order site to the district hospital five kilometres away, ignoring all the injuries he incurred at the hands of the protestors on the way back. When asked about the effort, he had his simple reply, a small blush and a little twinkle in those eyes. That was our boy. Selfless, brave, dedicated and a very good son. He accompanied me in every battle I fought on the field and on many occasions I owe my safe return to his bravery.

He was duly recognised for his efforts by the Government of Jammu and Kashmir, which conferred him with the prestigious Sher-e Kashmir medal.

There were moments during our small excursions in the hills, where we used to pull his leg, telling him , that we all would take his baraat to his village in big police convoy, putting him on a police truck. It all used to end with all of us laughing, and JD blushing quietly.

Everything was going on well. I completed my second tenure as the police chief of Shopian district and asked JD if he wants to stay back or hang on to me. He quietly packed his bags and sat in my car to continue our association. This he did despite knowing that he shall be staying far away from family for long. I couldn’t say no to JD. I always had a YES for him.

On the fateful day, today, last year, the 05th of July , while he was out there on duty, JD was kidnapped by militants outside a medical store. They took JD after firing a few shots in the air, and knowing very well that the fighter was un-armed.

My phone rang at 06.45 pm on that day. It was the girl whom he loved the most. She kept crying on the phone and asking me “ why him?”. I had no answers. She yelled at me ordering me to get him back. The world suddenly had come to a stand still. It was happening. Our boy was with the enemy.

A long effort in a short few hours was undertaken. Everyone from all the forces, all the friends, we all tried whatever we could. At dawn we found his body with gunshot wounds in his heart. JD had been martyred. After paying due respects to the martyr, while we were taking his mortal remains to his village, the entire team broke into tears. Here we were, JD on a police truck, and a full convoy of police cars, taking our hero to his home. It wasn’t his baraat, it was his team, bidding him farewell.

All of 27 years, and all full of dreams. When his father hugged me after reaching his village, he was very calm, and composed. He told me pinching his fingers that he removed small iron pieces from his young son’s body, while cleaning his fatal wounds. Those were pieces of the bullet that pierced the body of JD. The father carried his coffin and we all knew, younger the coffin, heavier it would be. He reminded me how important we all were for JD. We all were a closer family to JD, even more than the one in which he was born, and now brought back martyred, for the cause we all hold dear.
JD has fallen. Many like him did too. But the question still remains. Why are their Stories not told? Why are they just a number? He sacrificed his life in the line of duty, he lived for peace. He revered the idea of India. Was an ardent supporter of the Mumbai Indians in the IPL, a city which I belong to, and that was enough for him to follow it. He was a true patriot, much more than patriotism can ask for. At the close of the American Civil War, Abraham Lincoln while commemorating the martyrs that laid down their lives for the idea of the country they believed in, he said that the men had given their last full measure of devotion to their country.

JD may have been separated from those men by a couple centuries, but his devotion to his country was no different. His father wants to build a small clinic with the money he would get from the government for his son’s services. He tells me, the dispensary will be charitable. He wants his son’s memory to endure and this dispensary to become his legacy. My grand salute to this family of extraordinary humans. There are many such JDs serving the cause of peace in the valley and laying down their lives for this great nation. We miss you boy.