Governor Satya Pal Malik has e-inaugurated the ambitious Bhawan-Bhairon passenger ropeway project to connect the cave shrine of Goddess Vaishno Devi with the Bhairon temple nestled in the Trikuta hills at Katra. 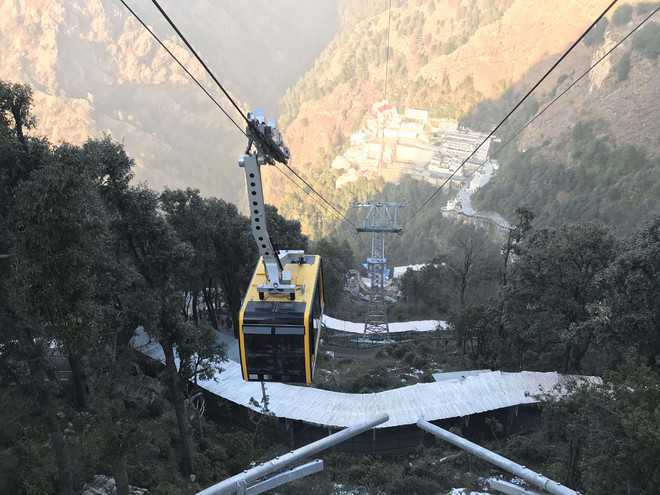 Conceived by former Governor NN Vohra, who was also the chairman of the Shri Mata Vaishno Devi Shrine Board (SMVDSB), the ropeway project would come as a boon to lakhs of pilgrims undertaking the taxing and arduous journey.

The much-awaited ropeway, which would facilitate Vaishno Devi pilgrims, will cover a distance of 1.5 km and would reduce travel time of one-way journey from one hour to just three minutes.

Earlier many pilgrims, especially the elderly and specially abled, avoided visiting the Bhairon Ghati temple due to the steep climb to an altitude of 6,600 feet.

The foundation of the project was laid in April 2013, and the former Governor had pressed for the timely completion of the ropeway.

Completed by the shrine board at a cost of Rs 85 crore, the ropeway has the capacity to ferry 800 persons per hour.

The shrine board will charge a subsidised fare of Rs 100 for a one-way trip.

The trial for the project which started on November 26 concluded recently.

Besides the trial and testing of the ropeway, mock rescue and evacuation drills were also conducted to ensure the safety of the passengers.

The project has been executed by Garaventa AG, Switzerland, and Damodar Ropeways Construction Company (P) Ltd, Kolkata, under the ssupervisio of RITES Ltd.