Long gone are the days when igloos were said to be a thing of the Arctic region. One man from Jammu is going to change this belief. Vivek Sharma, an architectural engineer of Jammu going to build igloos in Jammu.

With this novel idea, Vivek intends to attract tourists to the untapped tourist potential of untouched places of Jammu. 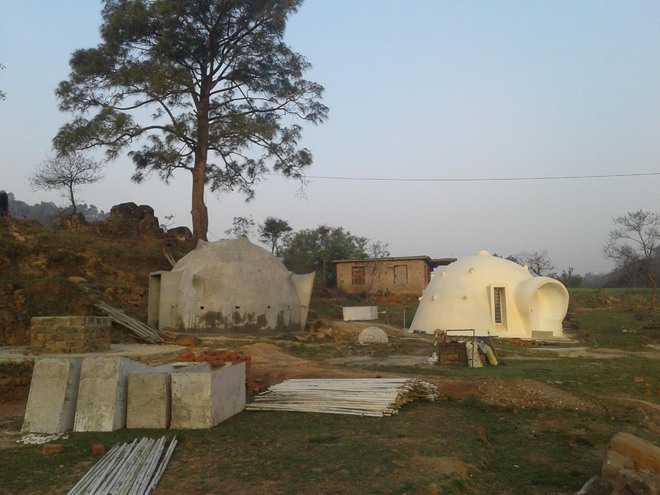 The eco friendly igloos are going to serve as ‘home away from home’.

The dome is a single-storeyed unit with a spherical water channel running along the base wall of the shell that helps rainwater harvesting and can be used for plantation drive around the hut also. Solar power utility is used for electricity generation in the dome.

Vivek has already finished securing the patent of such structures from the Department of Industrial Policy and Promotion, Ministry of Commerce and Industries. He has gone ahead went ahead with the purchase of land near various tourist spots in Jammu

For those interested in architectural details of the building, Vivek explains as,

“It is a beehive concept of concrete construction with round or oval-shaped roof not supported by any beam or pillar. A small mound of concrete, sand and gravel is made with nearly 500 holes dug into it and plastic pipes of size of 8-10 feet pushed into these holes to make it a porcupine type of structure”

The beehive module of pipes (tentacles) is spread with a heavy material cloth pulp mixed with concrete slab of 2.25 inches thickness and 4-mm steel randomly used to tie the dome structures, which are resistant to all weather conditions and natural calamities such as earthquakes, hurricanes, snow blizzard or windstorm.

One igloo hut of one marla, consists of a kitchen, double-bed space, table with two chairs and a small bathroom, will not cost more than Rs 3 lakh.

The project includes contributory investment in land conceived as a forum of interested entrepreneurs in unique land-based projects inviting their direct participation on the condition of equal incentive and stake.

The important features of the ‘Ik Gran Saarve Bhumee’ project include stay in dome-shaped huts under ecologically sensitive environment. Picnic lawns, play area for children, farm-house like feel with self-grown organic vegetables and open kitchen are some of the other features of these huts.