An exhibition of rare Quranic manuscripts, elegant calligraphic works and art masterpieces is drawing hordes of people here and behind all of it is a Hindu dogra family from Jammu .

Suresh Abrol from Jammu, the man who has painstakingly preserved these valuable manuscripts, says these are part of his grandfather Lala Rekhi Ram Abrol’s collections. 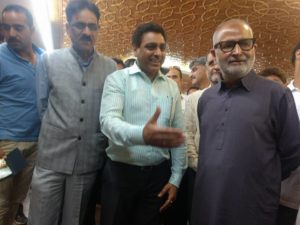 “He was a jeweller in the court of Maharaja Hari Singh, the last Dogra ruler, and collected many of these items. My father sought only one thing in inheritance – these ancient manuscripts and other collections. We consider them our real inheritance,” he says.The exhibition, “Shireen Qalam”, has been organised by the J-K Academy of Art, Culture and Languages in association with the Department of Tourism and the Indian National Trust for Art and Cultural Heritage at the Tourist Reception Centre building here.

Jammu and Kashmir Minister of Culture Naeem Akhtar inaugurated the exhibition on Thursday. It will be open for public till June 11. Over a hundred rare Quranic manuscripts, including “Nuskha Fatehullah Kashmiri” written by Fatehullah Kashmiri in 1238 AD, exquisite calligraphic works and remarkable art objects are on display.

“Nuskha Fatehullah Kashmiri” is the oldest available Quran manuscript in Kashmiri calligraphy.Other manuscripts that attract visitors’ attention include the copy of the holy book dating back to 1594 AD and considered to be the only sample in the world written in saffron ink.

“Our family has 250 Quranic calligraphy collections and 130 of them are on the vellum — a paper made from the skin of goat or camel,” Suresh says.He says they have brought two handwritten Qurans — one on a four-and-a-half feet by five feet cloth and the other on a five-feet paper.’Shajrah- e-Nasab’ of Prophet Muhammad, which is about 24-ft long, with pure gold illumination also adorns the walls of the TRC building.

The family also has a laboratory to take care of 5,000 manuscripts written in Arabic, Persian, Sharda, and Sanskrit.Suresh and his two brothers, who have converted their home into a museum, look after the collections and are being provided guidance by the state culture ministry. 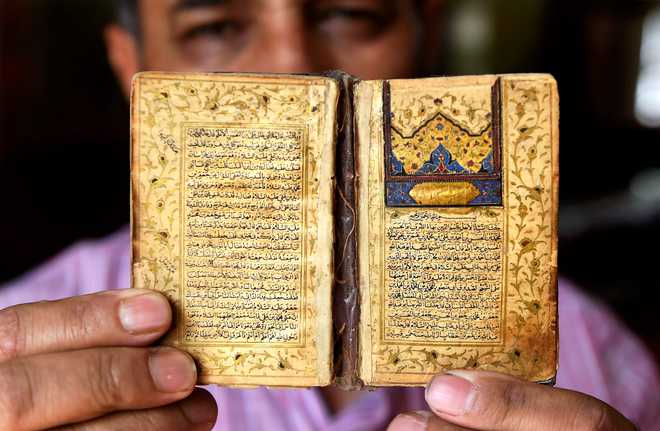 “We spend our own money for their preservation. This is our passion,” he says. Suresh says this is for the first time that the family decided to take the collections out of their house.”It was the state’s cultural department’s suggestion,” he adds.

In the calligraphy section, celebrated artworks by renowned artists are the centre of attraction of the hundreds of visitors who have thronged the exhibition for the last three days.

The exhibition offers a glimpse into rare Islamic manuscripts. One of them is “Sad Pand Luqman” of Hakim Luqman which is a Persian manuscript scribed by Peer Baksh of Punjab in “Khate Nakhoon” on ethics. The manuscript, penned in 1870 AD, is ornamented with gold and the borders are decorated with pictures of animals and birds.

A Quran dated 961 AH (roughly 1553), which is handwritten on Samarqandi paper, and a Persian translation of the Quran by Mir Saeed Andrabi in 1850 are also on display.

[Originally posted in The Tribune ]