People have locked their houses and taken shelter under the shade of a banyan tree. Ahead of harvest season, their crops have already been destroyed by stray cattle. They go back to their houses during morning only to return back to the tree in a couple of hours. Many of their women have not eaten for 14 days. This is the story of villagers from Rasana. The banyan tree, away from the village, is located at Kootah Morh on the Jammu-Pathankot highway. And Rasana is the village which is making international news these days.

It has been around three months since the despicable rape and murder of the innocent child but media houses have just recently started ground reporting from the village. Although news crews from all over the country are visiting Rasana, the voice of the poor villagers is hardly to be heard anywhere. Women have been on fast-unto-death for the past 14 days seeking fair and impartial CBI investigation, but their version doesn’t sound convincing enough to be broadcast. Eight women have already been hospitalised due to health issues caused by the fast.

There are 14 Hindu families in the village. While three families have members in government jobs, the members of the remaining families are mostly labourers who work as coolies in Mumbai. Keeping in view the safety of their families, they returned to the village and have now taken shelter at Kootah Morh.

The villagers believe that they have fallen victim to a “big conspiracy” hatched by Kashmir-based groups, with “unflinching support” of the government, to divide the people on communal lines and “terrorise” a particular community in the name of investigation. A few policemen have also been deployed in the village “to keep a check on the movement of people and outsiders.” 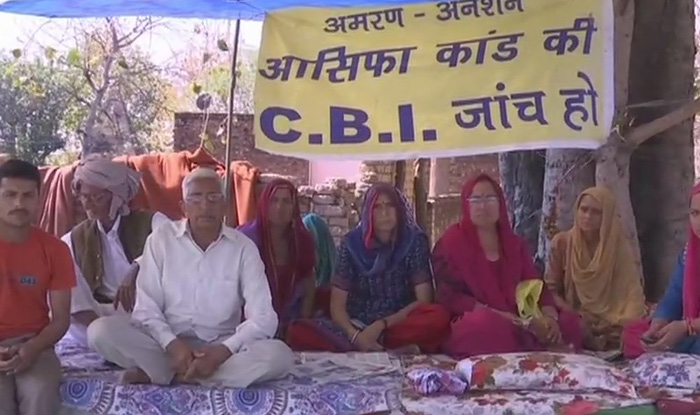 “The chargesheet filed by the Crime Branch has firmed our belief that the incident was a part of bigger conspiracy which needs to be exposed. The role of the national media remained negative and they did not listen to our pleas. We, too, want justice for the victim and her family and nobody has second thought on it. The village is now flooded with mediapersons, who earlier did not bother to visit the village and hear us.”

Darshana Devi, who is on the fast-unto-death, says,

“There is not even a single person in the village who is not in favour of justice to the victim and her family. We, too, have daughters and we understand the pain of the family but this does not mean that they (Crime Branch) can harass our children and men. A sin has already been committed (referring to the murder of the minor girl) in the village and the government is bent on committing another sin by torturing our children.”

“The Crime Branch has crossed all limits of harassment in the case. Everyone is in favour of justice to the victim and her family but this investigation has more than what meets the eye. It seems Kashmiri politicians and their mentors have managed to succeed in their designs by creating a divide among Dogra Gujjars, Bakerwals and Hindus. We have never seen such situation in the past.”

The villagers repeatedly reject the charges that the victim was held in captivity at a ‘devsthan’ (religious place) before being raped and murdered, saying

“The lock at the devsthan had three keys with the people of three villages who used to open it regularly. This is a concocted story to create a communal divide in the region.”

The seasonal migration of the poor bakerwal family is being tagged as “migration-out-of-fear” while the genuine slogans of Bharat Mata ki Jai alongwith the Tricolour is being tagged as “supporting-the-rapists”. What could be more disappointing to see the sad state of poor Rasana villagers, that despite raising the national flag and crying out aloud for CBI enquiry, all they got was indifference of media and both the governments.

[With inputs from The tribune, originally posted in The Tribune ]