A young terrorist, Eisa Fazili, of Soura, Srinagar, was killed today by security forces in an encounter in Anantnag.  He had taken up a new name Eisa Ruhollah Khatab Al-Kashmiri. Eisa was a 7th semester engineering student of Baba Ghulam Shah Badshah University when he quit studies and went missing from his hostel room on August 17, last year.

His father had called him back through social media warning him about being misled from the path of peaceful Islam. But Eisa didn’t turn back. He joined ‘Ansar Ghazwat-ul-Hind’ cell of Al Qaeda, headed by another engineering dropout Zakir Rashid Bhat alias Zakir Musa. Some sources also say that he was working for Islamic State.

It is pertinent to mention that Zakir Musa does not believe in the popular pogrom of Azaadi but strives for annihilation of non-Muslims and establishment of Islamic Caliphate, or Islamic Empire over greater portions of the world.

Today morning, Eisa’s father posted on social media declaring the death of his son in this post 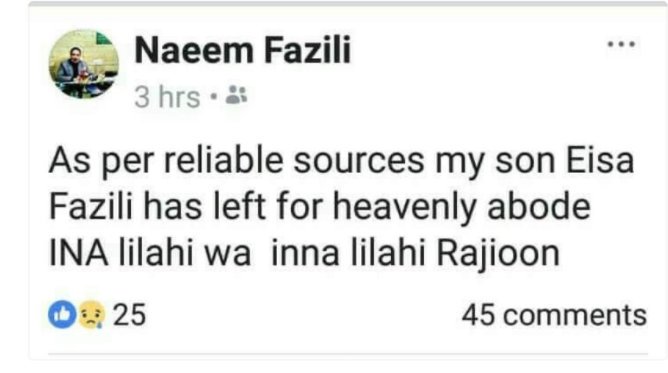 It is sad that how our traditional values of love and forgiveness are giving way to hatred and fanaticism. If only he had listened to his father’s honest advice, he’d be earning and leading an honest life.