Prior to the 17th convocation of the Jammu University, which is to be held on the 4th of March, a peculiar issue has surfaced.

The management in the invitation cards has “mentioned” the caste of the invited faculty members. Here are pictures of a couple of the cards 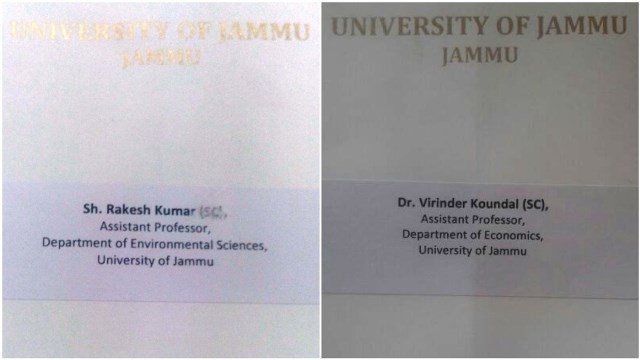 According to the Wire,  around 30 such faculty members received these invitation cards. Of these, 12 have confirmed that they received invites which spell out their caste.

Virender Kundal, from the Department of Economics says,

“I can’t recollect the exact years it happened, but the varsity has more than twice humiliated professors from the SC community by mentioning their caste on invitation cards. We ignored such tricks but now we’re fed up”

“In all of my [academic] papers, I’ve always applauded Jammu and Kashmir for being the only state in the country where untouchability has almost been abolished. But after noticing this sick mentality prevailing within its highest centre of learning, I am very disturbed.”

Lauding the role of Maharaja Hari Singh in abolishing caste system, he adds

“Our late Maharaja Hari Singh would worship girls from the scheduled caste community to try end the culture of untouchability and I hold him in high esteem. Even he would not be happy in heaven to see the attempts of some ‘sick minds’ to discriminate against people on the basis of their caste,” added Kundal.

Prof. Ramji Dass Sharma, the Vice-Chancellor of the university has termed the episode as a result of human error saying

Not only the VC, Meenakshi Kilam , the Registrar has also admitted the mistake saying

“On behalf of the committee that finalised the guest list and prepared name slips and the University of Jammu, I tender a deep and sincere apology for the inappropriate labels on the invitation cards. The convener and co-convener of the committee have been asked to immediately replace the cards. The inconvenience and hurt caused is deeply regretted”.

On World Milk Day read about growing demand for dairy products in Jammu &...