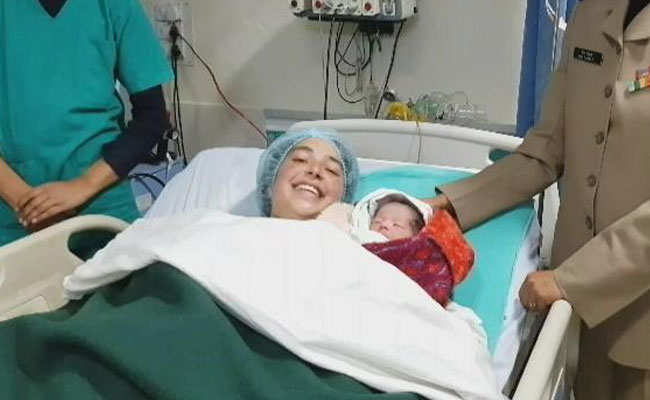 As soldiers fought to flush out terrorists who attacked the Sunjuwan military camp through Saturday night, just 10 km away, their colleagues at the Satwari military hospital were engaged in another battle. To save the lives of 11 people with gunshot wounds, all injured at the camp. Among them was Shahzada Khan, a 24-year-old pregnant woman shot in the back by terrorists.

Army personnel rushed to the camp site that housed about 150 families to flush out the suspected militants of the Pakistan-based Jaish-e-Mohammad group and evacuate families trapped inside safely.

She was among the six people injured in the attack. The father of a soldier died in the attack. Army personnel, who found her in a pool of blood, evacuated her and rushed her to the Satwari military hospital, about 10 kms away, where a team of doctors immediately set to work to save the lives of Shahzada and her unborn child.

On Sunday, she gave birth to a healthy baby girl through Cesarean delivery. Both mother and daughter are stable.

It was a monumental task for army doctors at Satwari and reports said they worked all night.

“This wasn’t a routine case. As a gynaecologist, it is always our motto that mother should come alone and go with a healthy baby in her lap. It’s a very joyful moment for my hospital & our team. Patient is really happy,” a gynecologist at the hospital told news agency ANI.

Army doctors saved life of a pregnant lady injured in terror attack on #SunjwanArmyCamp, she delivered a baby girl through c-section last night; lady says, ‘I am very thankful to them for saving me and my baby’ pic.twitter.com/iOSwLhsnrv

“The doctors had a complicated case on their hands. The lady was hit with a bullet on her hip and was critical. At the same time, the pulse of the child was going down. The doctors had to cure the gunshot wounds and at the same time save the child. With time fast running out, they performed a Caesarean section,” Anand added.

A 14-year-old boy with a gunshot wound to the head is fighting for his life.

In all, nine people, including three militants, were killed in the terror attack on the Sunjuwan camp.