Two Army officers were martyred in a terrorist attack on the Sunjuwan Army camp in Jammu in the early hours of Saturday.
Junior Commissioned Officers (JCO) M Ashraf Mir and Madan Lal lost their lives in the attack launched by a group of four-five heavily-armed Jaish-e-Mohammed terrorists. Another officer and a civilian are among the six injured and have been moved to the military hospital.
A colonel-rank officer is among the injured, the state’s parliamentary affairs Minister Abdul Rehman Veeri said, reported PTI. The terrorists breached the rear side of the camp of the 36 Army Brigade, barged into the JCO family quarters in the garrison and opened fire.
“Around 4.55am, suspicious movement was noticed by the santri. The santri bunker was fired upon and they retaliated. The number of terrorists isn’t known, they’ve been cornered in one of the family quarters. The operation is on,” Jammu IGP SD Singh Jamwal had said.
It is believed that the terrorists have been isolated in one of the buildings.
The area was cordoned off after the arrival of the Army’s special forces and the Special Operations Group.

Deeply disturbed by the terrorist attack in #Sunjwan today. My heart goes out to the injured & their families.

BJP MLAs raised anti-Pakistan slogans in the #JammuAndKashmir Assembly, following which house was adjourned for 15 minutes and the proceedings resumed later. pic.twitter.com/GOEedSXgWM

Army and security officials is capable of hitting back, says Rajnath Singh

Speaking to reporters, Union home minister Rajnath Singh said: “Till operations are not over, it won’t be right for me to make any comments. Our army and security officials are doing their responsibility. They will never let our (country) down.”

Former Jammu and Kashmir chief minister Farooq Abdullah said, “No day passes by without such incidents and terrorists are all coming from Pakistan. If Pakistan wants good relations with India, they need to stop terrorism or it will have bad consequences. Sadly, I have to say if it continues, India won’t stop itself from waging war.”

On the BJP’s act of chanting anti-Pakistan slogans in the Assembly, Omar Abdullah tweeted:

Totally endorse my Party President’s views outlined in these two tweets. The party will say nothing more on this issue. https://t.co/TMUB0IK1Nr

We need to focus on the unfortunate developments in #SunjwanArmyCamp & not get distracted by misplaced slogans.

Jammu and Kashmir chief minister Mehbooba Mufti chairs a high-level security meeting in Jammu following the attack on the army camp. The meeting was attended by J&K director general of police SP Vaid and personnel from other security agencies. 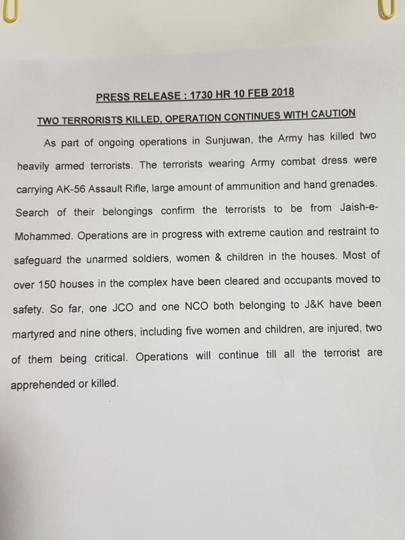