Chinese Army may try to carry out intrusions similar to the one that took place in the north bank of Pangong lake in Ladakh, according to report published in indiatoday.intoday.in. The news report have also stated that clashes are likely to take place in the Himachal, Sikkim and Arunachal sectors. Lipulekh Pass and Barahoti in Himachal, Uttarakhand may also face a similar face-off. 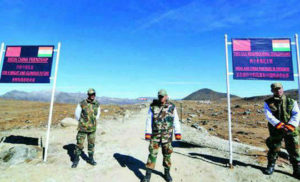 Following the reports, troops have been asked to remain alert and thwart any incursions by the Chinese Army. The government has asked the security agencies to not to be provoked and deal with the situation with calmness to prevent any escalation of the situation.

This assessment comes even as a prescheduled Border Personnel Meeting (BPM) was held between India and China in Jammu and Kashmir’s Chushul area in Leh district on Wednesday. Chusul is one of the five designated meeting points for troops on ground on either side to sort out local differences.

In the next 3-4 days, more local level meetings are likely to take place between the two sides at different locations on the Line of Actual Control (LaC).

THE SCUFFLE AT PANGONG LAKE

Indian and Chinese troops on Tuesday morning had a scuffle at the Pangong Tso Lake and later even threw stones at each other.

The border stand-off took place on the occasion of Indian Independence Day when as practice Border Personnel Meetings (BPM) take place at five points across Line of Actual Control (LAC) and sweets are exchanged between Indian and Chinese forces.

Scuffles are known to happen between troops along the border but throwing stones at each other is rare and unprecedented. Tuesday’s scuffle at Pangong and stone throwing incident has been viewed seriously by both sides.

Sources aware of the Border Personnel Meeting at Chusul said both sides also discussed to put behind the Ladakh clash incident.

The incident came at a time when both nations have been facing a continued stand-off at the India-Bhutan-China tri-junction in Doka La (Doklam).

China however said it is not aware of the reports of People’s Liberation Army (PLA) soldiers entering the Indian territory along the banks of the Pangong lake in Ladakh, as alleged by India.

Chinese Foreign Ministry spokesperson Hu Chunying said, “I am not aware of the information.” She said the PLA troops always patrol along the Chinese side of the Line of Actual Control (LAC).

“The Chinese side is committed to peace and tranquillity of the China-India border,” she said. “We urge the Indian side abide by the LAC and relevant conventions between the two sides.”

Snack and the city: How the Kalari Kulcha has kept up with Jammu’s appetite

Bad luck Jammu guys! Girls are not ready to marry you!